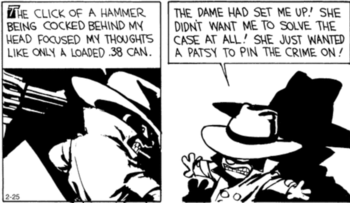 Adrian Monk: [distracted by Natalie drinking a bottle of mouthwash] Will you please? And that’s why they chose me. Adrian Monk, the perfect patsy! They knew about my problems. They knew I’d never take a good look at the guy. So, there never really was a leper except for the guy you were making out with all night.
— Monk, "Mr. Monk and the Leper"
Advertisement:

The perp hires a detective to solve the crime, in order to throw suspicion off himself. The perp may have a plan to make the detective a Fall Guy for the crime. Or it may be done merely to strengthen their claim that they're innocent and ignorant of the crime (the same logic that sometimes leads criminals to report their own crimes to the police). Typically, the detective in question is a Defective Detective, to minimize the odds of him actually working it out.

Invariably, the detective turns out to be not quite so defective as the perp thought, and figures it all out.

This often leads to monologuing (both from the Detective and the Perp) and the inevitable "The only thing I couldn't figure out was..." statement during the Final Confrontation.

This is an archetypal trope in detective fiction, as even Sherlock Holmes was abused like this.

This trope is often used as a reveal or twist, expect spoilers below.