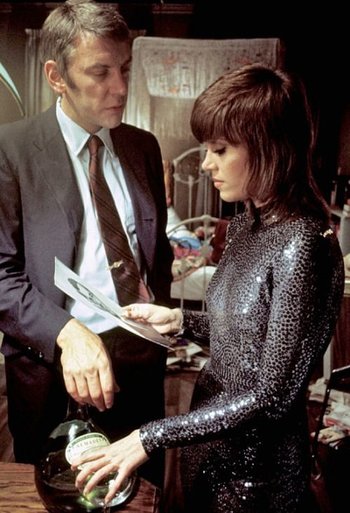 "And what's your bag, Klute? What do you like? Are you a talker? A button freak? Maybe you like to get your chest walked around with high heeled shoes. Or make 'em watch you tinkle. Or maybe you get off wearing women's clothes. Goddamned hypocrite squares!"
— Bree Daniels
Advertisement:

When Pennsylvania businessman Tom Gruneman (Robert Milli) goes missing, his wife hires John Klute (Sutherland), a family friend and private detective, to find him. The only real lead is some obscene letters Gruneman had allegedly written to Bree Daniels (Fonda), a call girl in New York City who was once high-priced, but after being busted by the police is struggling to make ends meet. Klute tracks down Bree, who reluctantly agrees to help trace Gruneman's whereabouts.

Fonda won an Academy Award for Best Actress for her performance.