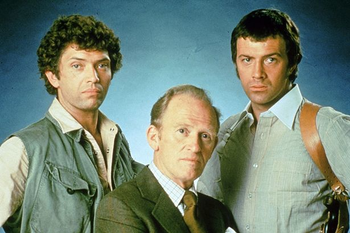 The Professionals was a British TV Action Series made from 1977 to 1983. The show follows the adventures of Criminal Intelligence 5 (CI5) agents William Bodie (Lewis Collins), Ray Doyle (Martin Shaw), and their boss George Cowley (Gordon Jackson). CI5 dealt with serious crime beyond the capacity of the police, and were authorized to use any means (including illegal ones) to do so (as lampshaded by the page quote.) Being a typical show of the times, much of the action centres around girls, guns, car chases, and drinking, much like its inspiration The Sweeney.

Interestingly the two leads were cast because they did not get on while working together on a previous project and the creator thought that would give the onscreen relationship between Bodie and Doyle the edge he wanted. While they worked out their differences in fairly short order and became friends offscreen they were good enough actors to keep the onscreen dynamic he wanted. However they later fell out over Shaw blocking repeats of the series - not because as commonly thought he was trying to move away from the typecasting the role had given him but more prosaically he didn't think the repeat fees they were offering were good enough. He finally relented after Gordon Jackson passed away and his widow ran into financial difficulties.

There was a Revival (CI5: The New Professionals in 1999), which wasn't warmly received, to put it politely. Not even having Edward Woodward take over the Cowley role could save the show from being a pale shadow of the original. Lasting for one season, it's available on DVD, but only in Australia/New Zealand.

It's rumoured that there's a remake being made

, prompting a collective Big "NO!" from the fandom. The good news is that in 2014 the original series was reissued on DVD and Blu-ray in a fully restored and remastered version.

Jackson died in 1990 and Collins passed away in November 2013 leaving Shaw as the only surviving main cast member.

It was a major inspiration of the Japanese manga Appleseed and its sequels, such as Ghost in the Shell.

Not related to the 60s western film The Professionals.

The Professionals contains examples of: