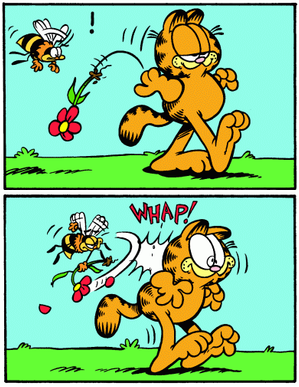 "I was gonna pollinate that, you jerk!"
Advertisement:

Where a character is given or is holding an item, considers it for a second and then dismisses it as worthless, unimportant, or irrelevant and subsequently rids themselves of it, frequently by tossing it over their shoulder without a glance.

Sometimes results in item breaking or secondary character chasing after it as it may actually be important. Sometimes it is a part that was broken off of something else, and is accompanied by an "Oh, well," or "Whatever." Can be Played for Laughs if discarded item unintentionally hits something, such as That Poor Cat. If it's a disguised explosive, expect it to detonate on impact. When this trope is in action, don't expect any form of proper disposal to occur anytime soon as Littering Is No Big Deal.

The item may just not be what a character is looking for, especially if sought item is thought to be buried in a closet or other clothing storage place. Expect something similar to a toned-down Ransacked Room but usually done by a forgetful owner who can't remember where they hid something.

Often used to show an impatient or careless character trait, or a moment of frustration.

While this does happen in Real Life, sometimes intentionally like a Bouquet Toss or for a Superstition Episode with salt, most people will simply put or hand an item back. If they do toss it, it usually isn't over the shoulder (a blind-spot). If it's actual garbage, might be used as a Wastebasket Ball. May come back later as a Brick Joke. Compare and contrast Bill... Bill... Junk... Bill....

In "Star Wars: The Last Jedi," Rey presents Luke Skywalker with his old lightsaber. He considers it, considers her, then tosses it away over his shoulder and walks away, leaving her bewildered.

In "Star Wars: The Last Jedi," Rey presents Luke Skywalker with his old lightsaber. He considers it, considers her, then tosses it away over his shoulder and walks away, leaving her bewildered.