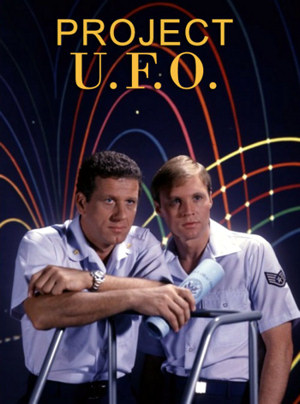 , in which they investigated thousands of reported UFO sightings.
Advertisement:

In 1978, Jack Webb (of Dragnet fame) decided to make a TV show about it. The show starred William Jordan and Caskey Swaim as the USAF investigators Jake Gatlin and Harry Fitz (Edward Winter replaced Jordan in the show's second half-season) who would go and investigate various reported sightings of UFOs in an attempt to either debunk them as something terrestrial or decisively prove that alien's from other planets really where visiting us. It began in February 1978 and returned in the fall of that year before getting axed mid-season, and ran for 26 episodes.

Often seen as a predecessor to The X-Files, though with no actual aliens in keeping with Jack Webb's penchant for keeping things real. All sightings investigated either had thoroughly earthbound explanations or were inconclusive.

It was the final series to come from Webb's Mark VII Ltd prior to his death a couple of years later.

Not to be confused with Project Blue Book