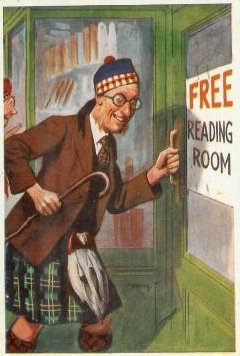 "In Scotland, panic buying of petrol is rampant, with Scots putting in as much as five pounds at the pump."
— BRIAN BLESSED, Have I Got News for You note For transatlantic reference, £5 is around $8, next to nothing in terms of US petrol buying and next to the square root of bugger all in more expensive Britain.
Advertisement:

Along with being brave and violent, Scottish people are also often stereotyped as being thrifty, if not outright stingy, with their money and belongings. Within Scotland itself, people from Aberdeen may be stereotyped as being especially thrifty. Probably Truth in Television, since Scotland has always been a poor area compared to England, not to mention being considerably less fertile than the south. Thrift is a necessity under such circumstances. This would be perhaps supported by the fact that among Englishmen people from Yorkshire have a stereotypical reputation for thrift. On the other hand, Ireland has in large periods of its history been considered even poorer but the Irish are stereotyped as impulsively generous.

Part of the reason for the Scottish reputation for thriftiness is the dominance of the (Calvinist) Presbyterian Church of Scotland, especially in the Lowlands, and the importance of the Scottish school of economics in the tradition of Adam Smith. Indeed, the Scottish reputation for thrift probably comes from the early 18th century, shortly after the union with England, when a lot of business-savvy Scottish Covenanters (i.e. Serious Scottish Presbyterian Calvinists) started to come to England to start commercial ventures; the role of these Scottish businessmen in the Industrial Revolution—also pairing up with very thrifty English Nonconformist Protestants—cemented the association of the Scottish people with fiscal caution. All this has tended to make large parts of the world look on the Scots as embodiments of the Protestant work ethic who are "all work and no play", combining the stereotype of the Thrifty Scot with that of the Dour Scot.

to establish colonies in Panama, which bankrupted many Scottish nobles and pushed forward the 1707 Act of Union.

See The Scrooge and All Jews Are Cheapskates for examples of non-Scottish people who don't like to spend money.