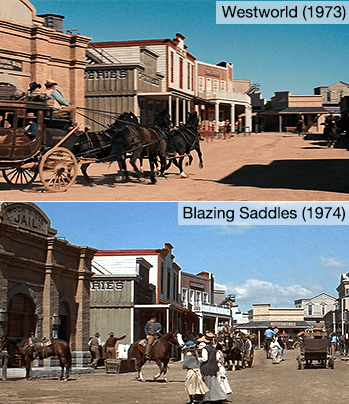 "This town ain't big enough for both of these movies."
"I love Drew Carey, but I have a hard time watching his show because they used our set and they have all our furniture. I'll be watching the show and suddenly I'm like, 'That's my fucking lamp!'"
— Margaret Cho, on her sitcom's replacement with The Drew Carey Show
Advertisement:

Since all of television and film works around a budget, there often isn't enough money to pay for all those expensive sets to be designed, constructed, and decorated and then be used for only one scene. When this is the case, the producers and/or director may opt for a Recycled Set.

A Recycled Set is pretty much what you would expect: a set that is either entirely or in large part composed of the main sets of the project. Since walls, windows, and door tend to be fairly simple and unremarkable, it's typically easy for set designers to rearrange specific pieces of furniture or strategically cover wall segments to create an entirely unique look.

Except in very rare circumstances, i.e. unless Played for Laughs, this set similarity is never noticed or remarked upon by any of the show's characters on-camera. They simply go on their merry way, unconcerned that Bob's front door looks strikingly similar to Officer John's office door.

In the Arcade Game industry, this takes the form of "conversion kits", which are designed to take an existing dedicated cabinet and repurpose it for a new game, saving a lot of money that would otherwise be spent getting a brand new cabinet. Aside from the obvious change in software, the decorations and sometimes the controls on the cab are changed out to fit the new game, but the shape of the cabinet is still clearly the same one used for the previous game.

Compare Hey, It's That Place! and Three-Wall Set. For the video game equivalent, see Copy-and-Paste Environments.

Apparently Caroline made sure that the house she stole had the same looking basement as Andy's set because she's "as big a fan of continuity" as him.

Apparently Caroline made sure that the house she stole had the same looking basement as Andy's set because she's "as big a fan of continuity" as him.