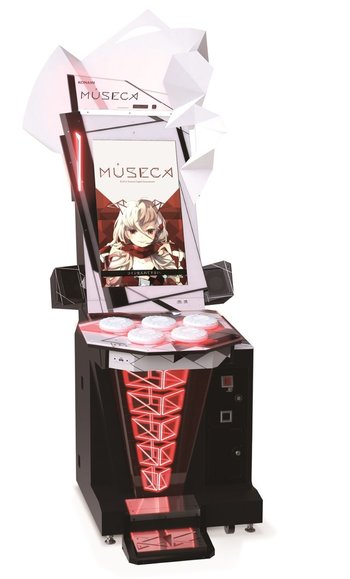 MÚSECA is an arcade Rhythm Game developed and published by Konami as part of the long-running BEMANI franchise, released in 2015.

The game features five discs arranged in two rows (three on top, two on bottom) and a foot pedal, with on-screen notes falling down in separate lanes per disc. Depending on the note, the player must press, spin, or rapidly spin one of the five discs, or hit the foot pedal.

In addition to the basic rhythm game elements, the player can earn "Grafica" illustrations that provide the player with power-ups called "GIFT"s at certain points in the song, such as providing score or health boosts. Graficas are illustrated by a variety of artists, giving each one a very unique feel.

As far as music selection goes, the tracklist is strictly composed of songs by commissioned artists and licensed songs, including songs produced with Vocaloids and 'Touhou Project'' arrangements.

The game is currently exclusive to Japan and rest of Southeast Asia, as well as Round 1 amusement centers in the United States.

A semi-sequel to the game, MÚSECA 1+1/2, was released as an online update on July 27, 2016. In addition to featuring a more streamlined interface, it splits gameplay into two different modes: a "pure game" mode that plays like a more traditional rhythm game (no Grafica effects and fixed maximum scores), and a mission mode where Graficas come into play, but with a more simplified element system. 1+1/2 is the final game in the series.

When Konami announced the 7th Konami Arcade Championship, MÚSECA and Reflec Beat were conspicuously missing from the lineup, and given that BeatStream did not appear in the 6th KAC and was subsequently terminated within the same year, players were concerned that the same could happen to this game as well. In November 2017, Konami began testing Bishibashi Channel, which reused the MÚSECA cabinet, as well as its spinners. While Konami did eventually add a few more songs that December, the writing was on the wall by June with the final update and the announcement of offline kits for arcades who do not want to convert a MÚSECA cabinet to Bishibashi Channel. Its online services ended July 31, 2018.

As a side note, to type the 'Ú' on a keyboard with an English-US layout, hold down ALT then press 0, 2, 1, and 8 on the numeric keypad in that order. You can also type "'&Uacute;" on this wiki or anywhere else that supports Unicode.

MÚSECA provides examples of the following: