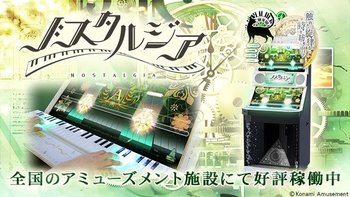 Nostalgia (ノスタルジア) is an Arcade Game, developed by Konami as part of their BEMANI line of Rhythm Games and available in Japan and select parts of the Asia Pacific. The game was originally made to convert BeatStream cabinets, as BeatStream's service was terminated in February 2017, although a dedicated cabinet made specifically for the game is also available.
Advertisement:

The game features a simple piano controller placed just below the screen. As notes descend on the screen, the player must hit the corresponding portion of the controller in time with the notes. The player does not need to hit the exact key; as long as the key pressed is within the width of the note, it will count as a note hit.

Games in the seriesnote all are arcade games released in Japan and select other countries in Asia, unless otherwise indicated:

Compare CHUNITHM, which also has variable-width notes that require hitting a wide rectangular controller, and Deemo which is also a piano-based game with a similar concept.
Advertisement:

Nostalgia provides examples of the following: