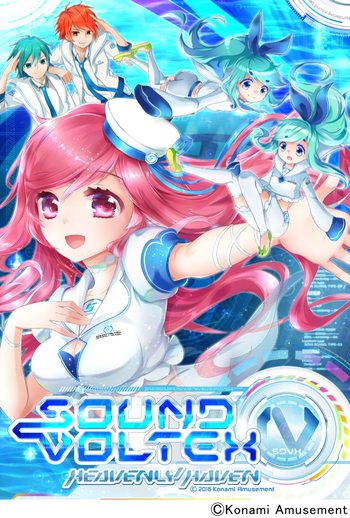 Your thundering sound become the flash light that pierces soul of crowd. Get the whole world into the Voltex... Next Generation Music Game.
Advertisement:

SOUND VOLTEX (officially abbreviated as SDVX) is a member of Konami's BEMANI series of Rhythm Games. It's a variation of beatmania with pretty much identical gameplay, in regards to the "hit the keys when they hit the line" part (but then again, aren't most rhythm games similar to that in the first place?). But instead of the familiar piano keys, it uses four square buttons in a row, accompanied by two larger "FX" buttons directly below them, along with effector knobs on both sides (which you must either slowly rotate in a certain direction, or quickly slam between sides).

The other big distinction is that most of its soundtrack consists mostly of remixes of songs from other Bemani games by doujin musicians; but through Downloadable Content, this aspect quickly went out of control as the game began to be flooded with Vocaloid songs and Touhou Project remixes (and even long-time meme songs like "Bad Apple", "Help me, ERINNNNNN!!", and even the Nyan Cat song).

There are currently four games in the series, with one receiving a PC port. Subsequent installments are provided as online updates, rather than through upgrade kits:

Although the series is pretty new compared to long-running BEMANI series like beatmania and DanceDanceRevolution, its unique twist on falling-note button-pressing gameplay, heavy focus on fan-submitted content from recogonizable and aspiring artists, the lengths to which Konami takes player feedback (in Sound Voltex II, Skill Analyzer charts were voted upon by players rather than being purely hand-picked by staff), and the loving care with which all key contributors to each song (music artist, chart designers (aka "Effectors"), and album art artists) are credited have made Sound Voltex one of the most rapidly-growing BEMANI series. In just three years, the songlist has expanded from 166 in Sound Voltex Booth to over 540 in Sound Voltex III; to compare, jubeat took seven years to reach that point. As of November 2016, Sound Voltex III had around 885 songs to play, and Sound Voltex IV currently has a little over a thousand songs.

Most Sound Voltex songs are considered licensed songs, and therefore traditional Sound Voltex soundtracks are not available. However, there are a few albums that feature songs throughout the series and are available for purchase, with some examples like SOUND VOLTEX ULTIMATE TRACKS -Touhou Koumakyou REMIX-, which is a compilation of songs chosen from the Touhou Project EOSDnote Embodiment of Scarlet Devil Remix Contest; BEMANI x Touhou Project Ultimate Master Piecesnote a compilation of song remixes from different Touhou games; and SOUND VOLTEX ULTIMATE TRACKS -LEGEND OF KAC-note songs that appeared as part of the KAC 2012 and KAC 2013 contests.

On October 4, 2017, Konami released Sound Voltex III GRAVITY WARS e-AMUSEMENT CLOUD, a PC port of the game. It is similar in functionality to beatmania IIDX INFINITAS, requiring paid "tickets" and subscriptions in order to use. In December 2021, Konami updated the game to the EXCEED GEAR engine and interface.

STAND BY - ON YOUR MARK - TAKE POSITION. READY?