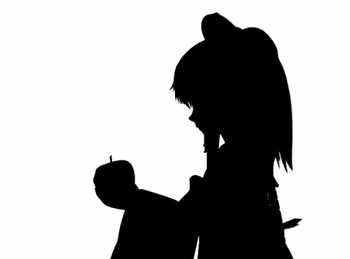 "Bad Apple!!" is a chiptune stage theme from the game series Touhou Project that received a popular remix (under the same name) from the Touhou Fan Music group Alstroemeria Records. Said song later received a fan-made black-and-white music video that exploded in popularity on the internet, becoming a viral video in the late 2000s.

" was the theme of the third stage of the 1998 Bullet Hell game Touhou Gensokyo ~ Lotus Land Story, composed by the game's creator ZUN. At the 4th Reitaisai convention on 20 May 2007, the Touhou doujin music group Alstroemeria Records released a remixed version of "Bad Apple!!" in the album Lovelight, featuring vocals from Japanese singer nomico (to differentiate this song from the original, it is typically referred to as "Bad Apple!! feat. nomico"). The remixed version was far more popular than the original (a minor stage theme from one of Touhou's lesser-known PC-98 entries), and inspired a series of events that led to the creation of its viral music video.

In August 2008, on the Japanese video website Nico Nico Douga, the user Μμnote Mu-mu; mu as in the Greek letter released a video

of a crude storyboard for a music video to (a slightly shortened version of) Alstroemeria's remixed song. The storyboard consisted of a series of clips, each displaying a Touhou characternote Specifically, from the modern Windows era Touhou games, from Touhou Koumakyou ~ the Embodiment of Scarlet Devil to Touhou Fuujinroku ~ Mountain of Faith, and requested other users of NND to animate the MV. Several users attempted to produce an MV based on this storyboard, but one stood out among the rest.

of Μμ's "Bad Apple!!" MV storyboard. The video used a monochrome "shadow-art" style, portraying the Touhou characters as 3D animated silhouettes, and smoothly transitioned between the clips using black-and-white Match Cuts. These distinctive stylistic elements made the video the undisputed definitive version of Μμ's MV prompt, and it rapidly climbed in popularity to become one of the most watched videos on all of Nico Nico Douga. The video also became incredibly popular in the non-Japanese internet through YouTube, and over the years has introduced many to the world and fandom of Touhou Project.

While technically just a fan video, the popularity of Anira's video attracted the attention of Alstroemeria Records, who unofficially adopted the video as the song's official MV

In the mid-2010s, Anira's music video saw a resurgence as an internet meme, where the video would be played/replicated on all sorts of normal and wacky mediums like graphing calculators or Minecraft sheep. Thanks to the stylized, silhouette-based art style, any medium capable of producing two contrasting colors can theoretically be engineered to play "Bad Apple!!" on it, making it the video equivalent of wacky Doom ports.

"Bad Apple!!" and its music video provides examples of: