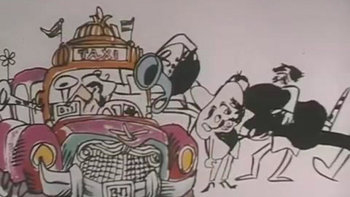 A Herb Alpert & the Tijuana Brass Double Feature is a 1966 animated short film (six minutes) by John and Faith Hubley.

It is—no prizes for guessing correctly—a double feature consisting of two videos set to the music of mariachi combo Herb Alpert and the Tijuana Brass, source of many an ear worm from the 1960s. The film consists of opening credits set to an excerpt from Alpert's "Mexican Shuffle", before the two cartoons, which are connected by nothing other than Alpert's music: