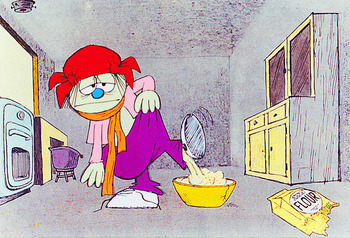 Nudnik is, per Word of God, a "loveable loser

." He lives in a ratty apartment in a crumbling New York building that has been condemned. One day he wakes up and, in the process of attempting to perform various routine tasks—get out of bed, put on a hat, make bread—he proceeds to destroy his apartment.

First of twelve "Nudnik" shorts produced 1965-67, before Paramount got out of the theatrical animation business along with the rest of Hollywood as The Dark Age of Animation began.