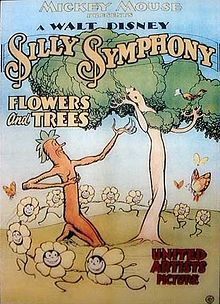 "Flowers and Trees" is a 1932 Silly Symphonies short subject, directed by Burt Gillett. It covers the very basic story of two trees falling in love, only for an ugly, rotten tree to try and wreak havoc with a fire.

"Flowers and Trees" was already in production as a black and white cartoon before Walt Disney saw Herbert Kalmus' three-strip Technicolor tests. Deciding that Flowers and Trees would make a perfect test for the process, he completely scrapped the black and white footage, and had the short redone in color. As a result, Flowers and Trees was a commercial and critical success, and thus won the first Academy Award for Animated Short Subjects—another step forward to animation becoming a respected medium.

As a result of the success of Flowers and Trees, all future Silly Symphonies cartoons were produced in three-strip Technicolor, and the added novelty of color helped to boost the series' previously disappointing returns. Disney's other cartoon series, the Mickey Mouse shorts, were deemed successful enough not to need the extra boost of color, and therefore remained in black-and-white until 1935's "The Band Concert".

Disney's exclusive contract with Technicolor, in effect until the end of 1935, forced other studio imitations of the series, such as Ub Iwerks' Comicolor Cartoons, Warner Bros.. Merrie Melodies and Max Fleischer's Color Classics to use Technicolor's inferior two-color process or a competing two-color system such as Cinecolor.

"Flowers and Trees" provides examples of: