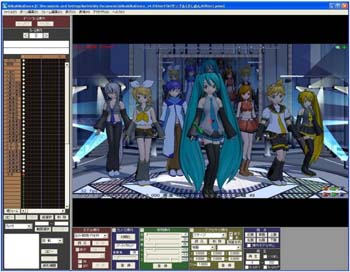 MikuMikuDance (known amongst the community as MMD) is a freeware program that lets users create 3D animated movies, originally produced for music videos of Vocaloid Hatsune Miku. The program itself was programmed by Yu Higuchi (HiguchiM) and has gone through significant upgrades since its creation. Its production was made as part of the VOCALOID Promotion Video Project (VPVP).

Many notable Vocaloid music videos have been made with MMD, such as the music videos for Mitchie M's Viva Happy and News 39.

The software comes with a pack of 3D models of the Crypton Future Media Vocaloids (Miku, Kaito, Len, Rin, and Meiko). Additional models can be downloaded for use, however, the copyright rules depend on the modeler himself/herself. Other programs have been made to work with MMD, like PMD editor, and MikuMikuEffect.

Animated shows which use MikuMikuDance include Straight Title Robot Anime and Hi-sCoool! SeHa Girls. Kizuna AI, the Trope Maker of Virtual YouTubers, is also animated in MMD (via body tracking).

The Japanese version can be downloaded here

.note Both original websites are no longer available due to Yahoo Geocities being shut down. Miku Miku dance can still be found here

MikuMikuDance and videos made from it provide examples of: