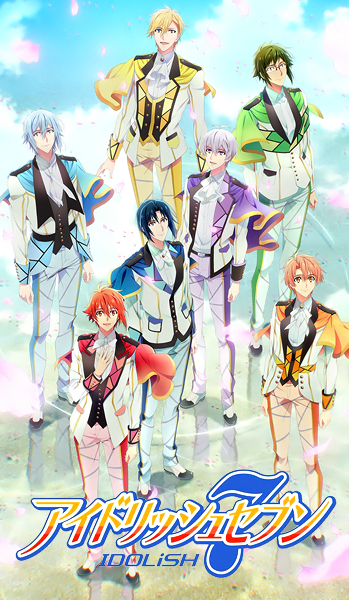 IDOLiSH7 is a combination Rhythm Game and Visual Novel mobile app released by Bandai Namco Entertainment. The game launched on August 20, 2015, and has surpassed 3 million downloads. It has since spread into other media, including multiple manga adaptations and a novelization. The character designs were provided by Arina Tanemura.

The story starts with Part 1, which follows the seven rookie idols of IDOLISH7 and their manager (the player character) as they gain experience in the entertainment world and grow from the many challenges they face. Part 1 also introduces TRIGGER, their darker and sexier rivals, who are not without their own challenges. On March 7, 2016, the game updated with Part 2 of the story, which introduced the senpai idol group Re:vale and dug a little deeper into the mystery of Legendary Idol Zero.

Part 3 wrapped up at 20 chapters in 2018 and Part 4 followed in 2019 with 20 chapters. An anime adaptation by TROYCA ran in the Winter 2018 Anime season, with a Youtube Originals short series about TRIGGER in the same year. The second season Second Beat!, adapting Part 2 of the story, was set to run through the Spring 2020 Anime season, but was pushed back due to the COVID-19 pandemic. Season 2 returned on October 4, 2020, starting back from episode 3, and was followed up with a third season announced at the end of the same year. A game for the PlayStation Vita, IDOLiSH7 Twelve Fantasia!, was released in 2018.

The game (and the project in general) has gained much popularity and praise due to its fun songs, simple mechanics, complex characters, and engaging story. In particular, many have praised the game for showing the difficulties and darker side to the idol industry, while still having many fun and lighthearted moments interspersed with that.

NOTE: As the game is currently only available in East Asian regions, please be careful with spoilers.