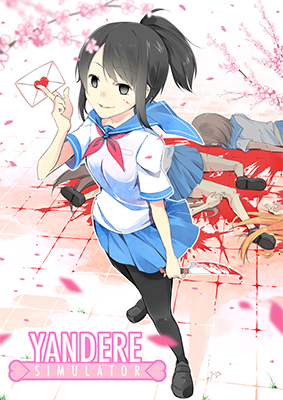 Don't let Senpai notice you!
"That girl is talking to Senpai. That's unacceptable. We're going to have to get rid of her. But how?"
— YandereDev, distilling the game's concept

Yandere Simulator § [working title; it might change] is an indie stealth game for PC that explores the tropes and clichés associated with the Yandere character archetype. Its protagonist is a high-school girl, the titular "Yandere-chan" (real name Ayano "Yan-chan" Aishi), who until recently felt completely empty, unable to experience the normal range of human emotions. That all changed the day she met Senpai (real name Taro/Taeko Yamada), the first person in her life to actually make her feel something. Addicted to the new emotions her Senpai stirred in her, she developed an obsession with him (or her) at first sight. Unfortunately, Senpai is starting to get pretty popular at school. So, what's a girl to do to keep Senpai for herself? Why, remove any rivals for Senpai's affection by any means necessary, of course!

Originally beginning production in April 2014, with the first notable public build appearing in January 2015note  (the 2014-era builds are proof-of-concept prototypes with no gameplay at all and were not intended to be widely shared), the free demo, which introduces the first rival Osana Najimi, was released on August 31st, 2020 to promote the game's crowdfunding campaign. On October 10, 2021, 1980s Mode was released to show proof of concept of eliminating 10 rivals. It is programmed in the Unity engine by a single person calling himself "YandereDev" note (his first name is "Alex", as stated in early interviews, but don't call him that, he doesn't like it; he formerly did Let's Plays as EvaXephon, but he retired that name out of Old Shame), who has a development blog

that is updated periodically.

Please note that, as this is a game still in development, things can and often do change radically with subsequent updates.

The official website, which has a link to any current builds, can be found here

open/close all folders
A
B-C
D-E
F-G
H-K
L-M
N-R
S
T-Y
"Thank you for following the development of Yandere Simulator."
— YandereDev at the end of all his videos.
Feedback