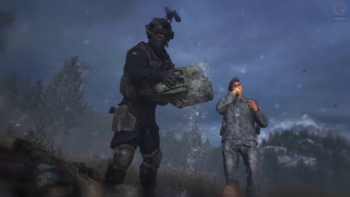 When someone pulls this thing out, things are about to get hot!
"Paper burns well. Petrol burns better."
— The Magnus Archives
Advertisement:

Sometimes victims are to be disposed of right then and there, but other times there's a bit more to the process. Times like this call for a truly incendiary statement!

As you might guess, this occurs when a captor takes out a container of gasoline, douses it over something — whether it be a restrained living victim, a corpse and/or the property of a victim — and sets it ablaze.

This trope often appears in dramas and action works when someone innocent (or sometimes not so innocent) is set to be lit up. The captor is often a villain who does this not only to eliminate the victim but also send a message that they are a force to be reckoned with. Can be used to build up suspense around whether the victim will be saved or not.

People who try to commit suicide via Self-Immolation will often do this as the fuel source for the fire.

Can overlap with Vapor Trail, Man on Fire, Ignorant About Fire, or Reusable Lighter Toss.

Note: As a potential Death Trope, there may be spoilers ahead!

Imps are immune to fire

Martha attempts to burn Millie & Blitzo to death, after a failed assassination, but the two turn out to be immune to fire.

Imps are immune to fire

Martha attempts to burn Millie & Blitzo to death, after a failed assassination, but the two turn out to be immune to fire.