Western Animation / Fugget About It 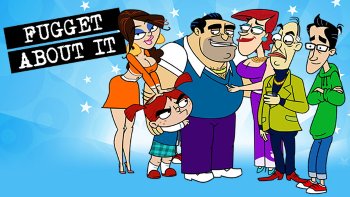 Fugget About It is a Canadian animated series created by Nicholas Tabarrok and Willem Wennekers and produced by 9 Story Media Group. Originally created for Teletoon's Pilot Project in 2008, it was later picked up for a full series that premiered in 2012 on the network's Teletoon at Night block (basically, Canada's answer to Adult Swim).

The series focuses on Jimmy Falcone, a former mob capo from New York, who found out his uncle and fellow capo Cheech were to be wacked. He sets out to talk to the don about calling off the hit, and ends up killing him. The mob puts a hit out on Jimmy, and he goes to the feds, where they have him rat out his friends, before putting the Falcone family in Witness Protection. Jimmy ends up moving to Regina, under the new name McDoogal, with his wife Cookie, oldest daughter Theresa, son Petey, youngest daughter Gina, and Uncle Cheech, with RCMP Strait McCool overseeing them.

And if you think just because they've changed their names, they're gonna change themselves, FUGGET ABOUT IT!

Fugget About It Theme

The opening tells you everything you need to know about why this Italian family moved to Canada.

Fugget About It Theme

The opening tells you everything you need to know about why this Italian family moved to Canada.