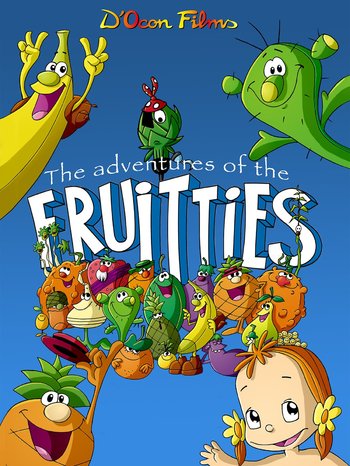 Delicious fruit they are, oh yeah!/Tasty and happy veggies, too.note The four main characters, shown in the four corners, are (clockwise starting from the bottom-left) Roly, Pak, Thorny, and Kumba.
Advertisement:

A cartoon from Spain that was made by D'Ocon Films Productions and aired from 1987 to 1989. It centered around a community of sentient fruits and vegetables called the Fruitties who live in what they think is an extinct volcano.

One day, however, the Fruitties' volcano does start to show signs of erupting, forcing the Fruitties to send three of their explorers to find them a new home. These three explorers are the show's main characters: Roly, a self-centered pineapple; Pak, a smart banana; and Thorny, a dim-witted cactus. These three run into Kumba, a human girl who got stranded on the Fruitties' island, and save her from some attacking tigers. Afterwards, Kumba joins Pak, Roly, and Thorny as a main character, and follows them to their new island home. The four characters then go on various adventures after moving to their new home.

The show ran for 91 episodes and was shown in several other European countries, including the UK and Ireland where it got dubbed in English.