Western Animation / The Future Is Wild 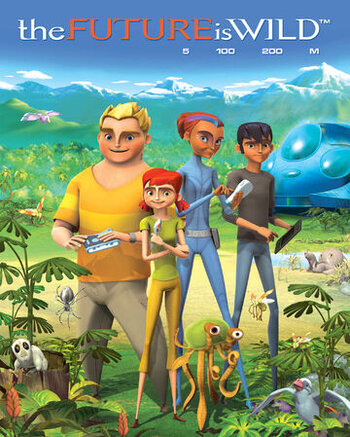 Sometimes I feel I'm dreaming, but when I open my eyes, well, the future is wild!note L-R: Ethan, Emily, C.G. (with Squibby in front of her), and Luis.
"Ten thousand years into the future, a mega ice age is threatening humanity. My mission: pilot the Time Flyer into the future and find a new home."
"Wild? I'll say! Like crashing way back in the twenty-first century! But luckily I met Ethan, Emily, and Luis, and Squibbon!"
—C.G., Opening Narration
Advertisement:

The Future is Wild is an All-CGI Cartoon from the world-famous Canadian animation studio Nelvana based on the popular Speculative Biology documentary series of the same name.

This Animated Adaptation focuses on C.G., a teenage girl from the year 12,000 AD where the advent of a massive ice age is threatening the human race. Tasked by her father to save humanity, C.G. is given a time-travelling ship known as the Time Flyer to travel into the future and find a new time period for humans to live in. However, C.G.'s first mission isn't exactly successful, as her trip to the world 200 million years into the future ends up with a monkey-like squid descendant called a squibbon sneaking on to the Time Flyer as a stowaway and accidentally causing C.G. to end up at the start of the twenty-first century, specifically the year 2000.

C.G.'s arrival in the past ends up attracting the attention of a group of twenty-first century teens named Luis Calabasas, Emily Lornatae, and Ethan Bolato, who discover C.G. and the Time Flyer. Having few other choices, C.G. brings them on board the Time Flyer as crewmates and also lets the squibbon (nicknamed "Squibby") stay as a pet (although she keeps its presence secret from her father, who provides instructions during her time voyages).

And so, C.G. and her new friends travel through the various time periods of the worlds that exist after man, exploring all manner of unique and fantastic environments inhabited the bizarre and spectacular descendants of familiar animals from the twenty-first century. As they travel these strange worlds and encounter the even stranger wildlife that populates them, the team carries out various missions and gets themselves into a variety of both adventures and misadventures, often utilizing technology from C.G.'s time to fulfill her ultimate mission of finding the perfect new home for the human race.

Essentially a way to introduce kids to the concept of Speculative Biology and to the worlds and creatures of the original documentary series through a Lighter and Softer, more entertainment-focused lens, The Future is Wild features all three of the time periods seen in the show and most of the environments and animals as wellnote The North American Desert and Mediterranean Salt Flats of 5 million years into the future, as well as the Rainshadow Desert and Global Ocean of 200 million years into the future are the only environments not featured in the show; logically, the animals living there don't appear either. Due to the different tone and visuals, as well as the somewhat lower budget, it also uses more simplistic and cartoonish-looking models for the animals compared to the source material, with the creatures engaging in Animal Talk. While these changes have earned it the gripe and ire of some (particularly more hardcore or serious-minded fans of the documentary show), The Future is Wild has nonetheless gained its share of fans and praise (include several award nominations).

The series ran for 26 episodes on Discovery Kids from 2007-2008 and later arrived in its home country of Canada on Teletoon in 2010. Reruns continued to pop up on the channels for several years however, and the show is now available on the streaming service Tubi for free.

The series' Character Sheet is shared with that of the documentary series.