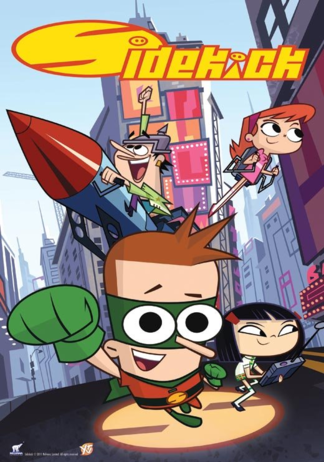 Just like superheroes, but only half as big! note Clockwise, beginning bottom left: Eric Needles, Trevor Troublemeyer, Vana Glama, Kitty Ko.
We are Splitsboro kids, and we go to sidekick school
Learning to be sidekicks while playing by the rules...
Advertisement:

Sidekick is a Canadian animated television series from Nelvana that was created by Canadian animators Todd Kauffman (co-director of the first two seasons of Total Drama and later co-creator of Grojband) and Joey So.

The show is about 12-year-old Eric Needles, the Kid Sidekick of the world's greatest superhero Maxum Man, who has mysteriously gone missing. Eric lives at Maxum Man's mansion (where he is watched over by Maxum Man's supercomputer Maxum Brain) in Splitsboro, a town literally divided between superheroes and supervillains. When not simply messing around in the mansion, Eric is usually attending the Academy for Aspiring Sidekicks, where kids like him are trained by the school's headmaster Professor Pamplemoose to become the sidekicks of Splitsboro's superheroes. Alongside his friends Trevor Troublemeyer, Vana Glama, and Kitty Ko, Eric finds himself in all kinds of misadventures where he must contend with Splitsboro's evildoers (notably Maxum Man's archenemy Master XOX, whose secret identity is Trevor's dad Martin) and rival superheroes, survive his school's intense sidekick training methods, and keep Maxum Man's disappearance secret from the rest of the world. Unfortunately for Eric, his mediocre skills and abilities in virtually everything makes all of this even more difficult than it sounds and frequently cause trouble for him and his friends.

Todd Kauffman and Joey So originally created Sidekick and its characters for five 5-minute shorts under the name The Not-So-Superheroic Adventures of Sidekick, which was part of Nelvana's 2004 Animated Anthology project Funpak. It was one of ten miniseries showcased with the purpose of potentially launching new TV shows, and the only one of them to become its own standalone show, having been the winner of a contest held by YTV for viewers to vote on their favorite miniseries.

The series premiered on September 3, 2010 on YTV. It came to the United States on Cartoon Network on June 13, 2011 alongside fellow YTV show Almost Naked Animals as part of a general trend of CN relying a lot on Canadian imports at the time. CN would drop the show after its second season, but Qubo picked up the rest of the series a couple years later. The series ended on September 14, 2013, after a 52-episode run split over 3 seasons. In 2021, Nelvana began uploading episodes of the show onto their YouTube channel Keep It Weird. The playlist is here

Eric hypnotizes Vana into falling in love with him.

Eric hypnotizes Vana into falling in love with him.