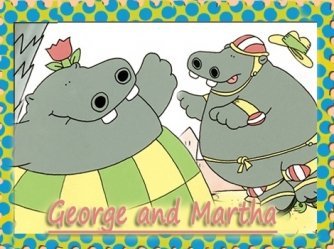 George and Martha is an animated Slice of Life Preschool Show from the world-famous Canadian animation studio Nelvana based on the book series by popular children's author and self-taught illustrator James Marshall originally written between 1972 and 1988.

The show describes the activities and adventures of best friends George and Martha, two hippos voiced by Nathan Lane and Andrea Martin respectively. These activities include taking dance classes, going to the beach and the amusement park, and playing pranks on each other. The series teaches us about friendship in a humorous way; George and Martha sometimes fight but always make up.

The show ran for 26 episodes over 2 seasons on HBO Family and YTV between 1999 and 2000. While Marshall had no involvement in the show due to his passing in 1992, Maurice Sendak (who also did Little Bear, and later Seven Little Monsters, with Nelvana) worked on the series as an executive producer.

Nelvana has made every episode available on Youtube through Treehouse Direct