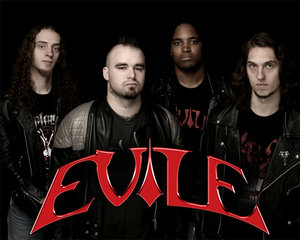 Bow Down to the Thrasher!
Butchered and maimed! Enter the grave!
—Title Track, Enter the Grave
Advertisement:

Evile is a British Thrash Metal band credited with kick-starting the second wave of thrash metal alongside Municipal Waste. They recorded their first album, Enter the Grave, in 2007 with Flemming Rasmussen, the Record Producer who produced Metallica's second, third and fourth albums. With a well-received first album and a song released on Rock Band, they hit a surge of popularity and released a more progressive second album, Infected Nations, in 2009. Tragedy struck when bassist Mike Alexander died on tour, leaving a girlfriend and kids alone. They've continued touring with a new bassist, and released a third album, Five Serpent's Teeth, in 2011.

Their fourth album Skull dropped in late May of 2013. In August, Ol Drake left the band and the band moved on with a replacement, Piers Donno-Fuller. After a few years of relative inactivity, Ol rejoined the band in the spring of 2018. Matt quietly left at some point in 2020, and Ol took his spot on vocals and welcomed in Adam Smith as the new rhythm guitarist. The band released their long-awaited fifth album Hell Unleashed in April 2021.