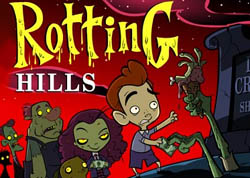 10-year-old Clark McWeeble and his parents have just moved to Rotting Hills, a place formerly known as Restful Hills until it was overtaken by zombies. His dad, who orchestrated the move in the first place, is quite excited about it and remarkably oblivious to anything abnormal about the place. Clark is understandably upset about the whole ordeal, but luckily for them the zombies turn out to be the friendly neighborhood kind.

As he adapts to the place, Clark gradually befriends a zombie girl named Zoe and her undead dog Buddy. They have a few adventures; at least, as much as you can fit into a 25-minute series.

Also see The 9th Life of Sherman Phelps, another Funpak miniseries that has its own page on this wiki.