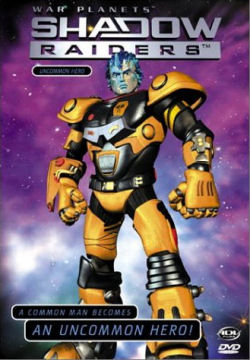 An All-CGI Cartoon from Mainframe Entertainment, makers of ReBoot. Shadow Raiders (1998-1999; also known as War Planets after the original toyline) tells the story of a quartet of planets divided by war for generations as they band together to defend from The Beast. Princess Tekla, not just the last survivor of her kind but of her solar system, flees her doomed world to warn the people of planets Fire, Bone, Rock and Ice about the coming threat. Graveheart of planet Rock, King Cryos of Ice and Princess Tekla fight off her pursuers and band together. From there, the story chronicles the struggles to form an Alliance against the Beast; battling prejudice, hatred, and suicidal pigheadedness, and that is just among each other!

Do not confuse with Shadow Raiders The Dragon Brigade.

With the enemy there are only three characters, which are technically (if not actually) part of The Beast Planet, a single organism.

Remarkable for having a solid continuity between episodes and a lot of Character Development. Though it follows most animated show conventions regarding onscreen violence (no one is seen to die, those killed go up in a burst of light without any blood), it started becoming increasingly dark in its second season, with the destruction of several planets. There was going to be a third season, which was going to give some of the Beast background, but the show ended up cancelled.

There is now a character sheet under construction.

There was also a PC game based on the toy line, War Planets: Age of Chaos.