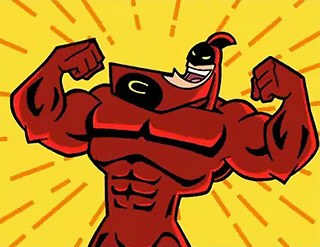 It doesn't get more heroic than this, folks.
Butt-Head: Huhuh, look at his face!
Beavis: Heh, look at that crack in his chin!
Butt-Head: I think it's a buttcrack!
Beavis: Well I guess that would make sense, since like, there's just a bunch of diarrhea coming out of his mouth.
Butt-Head: Yeah. Uhuhuhuhuh, it's like when God was passing out buttcracks, this guy got in line twice.
— Beavis and Butt-Head (riffing on Sam Harris)
Advertisement:

A square jawline. A protuberant chin. A manly cleft. Somewhere along the line (possibly around Superman's time), artists decided that these, more so than anything else, were the defining facial feature of really heroic (or really strong and dumb) characters. Perhaps to an even greater extent than broad shoulders, barreled chest, and absurdly large biceps, the surest sign of a character's strength and manliness lies in his chin.

Parodies of superheroes will take this trope to its illogical extreme, giving heroes jawlines large enough to logically prevent them from looking down — and possibly, a ridiculous "butt chin". Some artistic conventions also render the cleft as a "swirl" on the chin. While the gluteus chinnimus can affect non-heroic, not-so-strong characters, "chin swirl" is generally reserved for only the manliest of manly.

If a character with a jawline like this crops up in an American Western Animation production, there's a really good chance he'll be voiced by Patrick Warburton. Also common in Captain Space, Defender of Earth!.

This has some Truth in Television, as scientists have noted that there is a definite correlation between jaw size and testosterone production (though cleft chins are very much unisex). Plus, exaggerations aside, a well-defined jawline is considered by many to be an attractive trait in a man, which is why this trope is Always Male.

This is mostly a hero trope, but villains occasionally have chins like this.

Sister trope to Manly Facial Hair, where facial hair is a sign of toughness and masculinity. In fact, many men who don't have a strong jawline will grow a beard to conceal it. Compare Beauty Equals Goodness, Top-Heavy Guy. Contrast Villainous Cheekbones and Thin Chin of Sin (where angular faces characterize a bad guy).