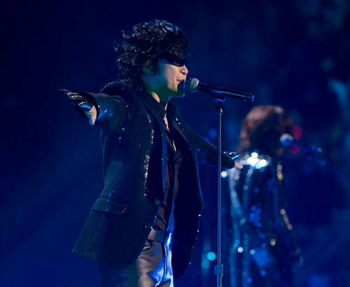 Toshimitsu Deyama (better known as Toshi or ToshI, born October 10, 1965) is the vocalist and co-creator of X Japan. In the 80s and early 90s, his incredible vocal abilities and his one-of-a-kind hairstyle designed by then-bassist Taiji made him one of the most distinctly recognizable metal vocalists out of Japan. He, along with Yoshiki and hide are the most well-known members of X Japan.

In 1997, Toshi decided to leave X Japan, which led to the dissolution of the band, and devote himself to "healing music" with his then-wife Kaori Moritani ("Wanku") and their religious leader Masaya. This did not end well.

His career outside of X had consisted of various collaborations/solo performances up until 1997. From his joining the Masaya sect in 1997 to his departure from it in December 2009, his solo career was solely healing music with Home of Heart, and "eco-rock" with the Masaya project T-Earth (members Toshi [v], Riku [d], Ryo [g], Kain [b].) from 2008 to 2009. It disbanded for a reason you can probably guess by this point.

Over 2006-2007, Toshi decided that he was going to help Yoshiki reunite X Japan, performing with the reunited band for the first time in 2007. He continued to perform with X Japan, while beginning the eco-rock band called "T-Earth" under Masaya's auspices, as well as releasing nearly a single a month, doing duets with other Home of Heart members and Kaori, lashing out at the sect's opponents, and working himself into a breakdown. Fans were decidedly split about his career choices and their opinions of T-Earth and the other Masaya work.

He was hospitalized, suffering from "intercostal neuralgia" and mutism as side effects from what he would later reveal to be repeated beatings, psychiatric injury, and injury to his larynx and chest muscles from physical overwork. He physically couldn't sing, all activities were put on hold until he arrived in LA for the filming of X Japan's PV Jade, where he was only supposed to move his lips from not being able to sing...

Then came the Drama Bomb and The Reveal. Originally in the form of a small, seemingly out of nowhere news report about Toshi and Kaori seeking a divorce, which was originally dismissed as rumor....until Toshi made a blog post on his Mixi (which was the only site under his control at the time) and then had a press conference, claiming that he had been misled and virtually Made a Slave by the sect, along with others. You can see video of the press conference uploaded here

for first part, rest is in related videos.

For the last 12 years, according to Toshi, he was allegedly being forced into more work and more projects by Masaya, as the leader of Home of Heart allegedly took all of the proceeds from both his work with X Japan and the a-single-a-month pace of Toshi's solo/duet/T-Earth career. This led to his alleged need to depend on friends and whatever he could scrounge for almost everything including food, his allegedly being a target of surveillance in a tiny Tokyo apartment while Kaori and Masaya lived in a mansion, and his eventual mental and physical breakdown.

At the beginning of 2010, he began to sing again as his body and mind began to recover from his bad experiences, and performed doing one solo concert and with X Japan.

As of 2011, he completed bankruptcy, restarted his solo career free of Masaya as solo projects and as Toshi featuring Yoshiki, his voice is once again at top form, and he seems to be well on his way to a comeback in the Visual Kei scene. Ironically, his may be the least tragic of stories related to X Japan - while he still has some ongoing problems, he seems to be doing well...and he is one of only three surviving members of the 1987-1992 band, along with Yoshiki and Pata.

As of 2014, he is collaborating with other Visual Kei artists again in his solo career (among them Shinya of Dir en grey and the guitarist from Merry), and he has released a book entitled "Brainwash" about his experience in the Masaya sect and leaving it.