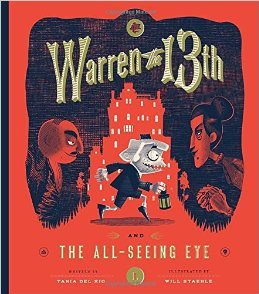 Warren the 13th is a children's fantasy series written by Tania del Rio and illustrated by Will Staehle. So far, there is only one book in the series - Warren the 13th and the All-Seeing Eye, published on November 24, 2015 - but there is a message at the end of the book promising more books to come.

The star is a young boy named Warren, who is the 13th in a long line of Warrens who have managed the Warren Hotel. Warren's father, Warren the 12th, dies before the events of the story. Since Warren the 13th is too young to manage the hotel, his uncle Rupert takes the reins. However, this proves to be the hotel's undoing: Rupert is so lazy and buffoonish that the hotel begins losing business, and deteriorating. To make things worse, Rupert has married a horrible woman named Annaconda, who acts sweet towards him, but vicious to everyone else. Did we mention that she's a literal witch?

The hotel is said to contain an ancient, powerful treasure called the All-Seeing Eye. Annaconda craves its power, and she's got a mysterious apprentice and her sisters, Scalene and Isosceles, to back her up. But Warren's not alone. He has friends to help him out too. Oh, and what of the mysterious bandage-faced stranger who just checked in?

Tropes found in The All-Seeing Eye include: