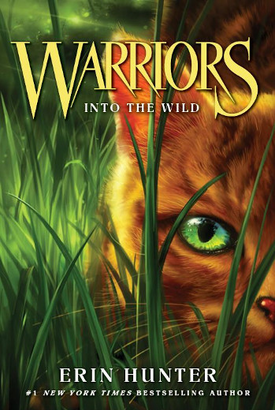 "For as long as any cat can remember, four clans have ruled the forest: ThunderClan, ShadowClan, WindClan and RiverClan."
Advertisement:

In this book series, cats run wild in large family groups, fighting each other, falling in love, and worshipping their starry ancestors.

Those of you expecting sweet little stories about cats lazing about licking each other and falling in love are in for quite a shock (although that happens too, of course). The books are quite dark, thanks in part to Erin Hunter's Anyone Can Die policy, and the series can be quite graphic, as the characters face certain death and possible annihilation at least once a series, and, early on, usually once a book. They also grapple with questions of faith, loyalty, honor, and responsibility on a very regular basis. These books are about as child-friendly as Watership Down.

Yet kids are the target audience.

The story centers on four "Clans" of cats that have lived in a forest and followed the spirits of their warrior ancestors (known as StarClan) for generations. ThunderClan (the focal Clan) lives in a forest and stalks their prey while priding themselves on their courage. ShadowClan, masters of stealth and night hunting, live in a marsh and need all their cunning to gather enough food to feed themselves. RiverClan cats love water and are known for swimming and being brilliant tacticians. WindClan cats are extremely fast, and they chase down rabbits on the open moorland. Many years have distilled the Clans and made them set in their ways and their prejudices, but new threats to the forest force them to start adapting to change and abandoning their prejudice. The events of the series take place over several generations, and show how the Clans change in those times.

Later books introduce several new groups of characters, such as a group of rogues called BloodClan, a fifth Clan named SkyClan that was driven out of the forest many years ago, a "Tribe" of cats that live in the mountains and worship their own set of ancestors, a pseudo-Clan living in a Twolegplace and facing its own unique problems, a mysterious group of predecessors to the Clans known as the Ancients, and the Dark Forest, the vengeful spirits of cats that believe themselves wronged by the Clans. This series definitely has a large cast.

List of arcs
The first, called The Prophecies Begin (originally known simply as Warriors or Warrior Cats, depending on where you live, until it received a name for a 2015 rerelease of the series) focuses on a house cat named Rusty. Bored with his comfortable and simple life, he ventures out into the forest where he is given the opportunity to join ThunderClan. However, he must deal with the hardships of the wild alongside the racism of his Clanmates, and he ends up being the Chosen One.
The second arc, The New Prophecy, stars the next generation of the Clan cats. A group composed of the kits of the previous arc's main characters (plus newcomer Crowfeather) set out on a journey to unravel a mysterious prophecy, forging strong bonds in the process. Meanwhile, calamity strikes in the forest and all four Clans find themselves facing possible destruction.
The third arc, Power of Three is a mostly character driven series. It tells the tale of another new generation of Clan cats, this time burdened with mysterious powers and the secret of an ancient prophecy. It also delves deep into the past, revealing the secrets forgotten by time.
The fourth arc, Omen Of The Stars, continues to deal with the mysterious prophecy from Power of Three. As the cats struggle to unearth the truth about their purpose, the old foes of the Clans are rising. Strengthened by years’ worth of animosity, they are preparing to wage an all-out war on the Clans. This arc was intended to serve as a Grand Finale to the modern day series.
The fifth arc, Dawn of the Clans, takes place decades before the original series, and focuses on a group of cats that are destined to form the Warrior Clans.
The sixth arc, A Vision of Shadows, returns to the story of the modern Clans. A ThunderClan apprentice discovers that it is his destiny to become a medicine cat, but first, he must embark on a journey that will determine the fate of the four Clans from his home, and the lost Clan, SkyClan.
The seventh arc, The Broken Code, takes place roughly six moons after the end of A Vision of Shadows. It focuses on the struggles faced by the Clans after an especially harsh winter, when they may have lost their connection to StarClan forever.
The eighth arc, A Starless Clan, focuses on an era of hope and unprecedented change in the Clans. As the Clan leaders deliberate on drastic changes to the Warrior Code, three young warriors discover what fate has in store for them. This is also the first arc to feature a RiverClan protagonist, in this case the medicine cat apprentice Frostpaw.

There are also plenty of spin-off titles out and coming soon, such as the Super Editions (extra-long standalone novels), Field Guides (which give additional information on the Clans and also include short stories that involve both the founding of the Clans and some of the modern characters), Manga installments (which generally serve as side stories to the main series), and novellas (which flesh out events that are briefly described in or give backstory to the main series).

Its two sister series, Seekers (a series focusing on a group of bears coming together to fight global warming, and both arcs are completed) and Survivor Dogs (a series by a different editor team working under the Erin Hunter pen-name, featuring dogs surviving in a post-apocalyptic city, with both arcs finished), are also worth checking out. A fourth series, Bravelands, featuring African animals, has been released in mid-2017, and with its first arc in progress.

For summaries of each book, see here. There's also a thriving character sheet. For the Warriors stories created by the fandom, see here.

If you're interested in buying some official merchandise, you can get some here

As of late 2016, Alibaba Pictures has obtained movie rights to the series, with David Heyman named as the producer.

Warrior Cats provides examples of tropes in these sub-pages:

Due to the series' spoiler-filled nature, including Spoiler Titles and even character names, all spoilers aside from the newest main-series book (Sky) and side book (Onestar's Confession) may be unmarked.