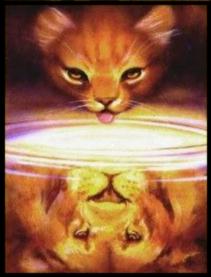 "Four Will Become Two. Lion and Tiger will meet in battle. And Blood will rule the forest."
"Fire alone can save our Clan."
—Into the Wild.

Warrior Cats: The Original Series (now called The Prophecies Begin) is the first arc of the popular Warrior Cats series by Erin Hunter.

The series focuses on housecat Rusty, who, tired of the easy life of a pet, decides to join ThunderClan, one of four warrior Clans who rule the forest neighboring his home. Rusty is dubbed Fireheart and sets out on a quest to unravel the secrets his Clanmates keep hidden in an effort to protect the forest from evil.

The series was inspired by Redwall and Watership Down and it shows. Anyone Can Die is in full effect, and every cutie is broken. The first arc is the most popular among the fandom, and is the bloodiest in the series.

The First Arc provides examples of: