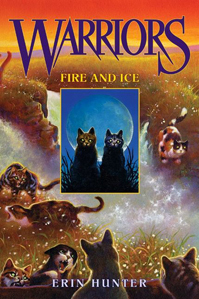 Fire and Ice is the second book in the original Warriors series (aka The Prophecies Begin).

In the prologue, beyond the territory of the four Clans, WindClan is seeking a home after having been driven out of the forest by Brokenstar. Ashfoot voices her concern about the safety of her kits, so Tallstar sends his deputy Deadfoot and the warrior Onewhisker out to look for shelter. A few moments later, they return, having found a tunnel WindClan could live in. Tallstar reluctantly leads his Clan into their new refuge.

Meanwhile, Fireheart and Graystripe have just finished their warrior vigil. Graystripe says that he could sleep for a moon, prompting Tigerclaw to show up and call him lazy. Fireheart remembers Ravenpaw's words about Tigerclaw being a murderer, and he decides to tell Bluestar about it. Just then, Bluestar holds a ceremony. She gives Longtail an apprentice named Swiftpaw, and Longtail is overjoyed.

On the night of the next Gathering, Fireheart talks to Bluestar and tells her that Ravenpaw isn't dead. However, she doesn't believe him when he says that Tigerclaw killed Redtail. Fireheart is frustrated, and decides to keep trying to convince her of Tigerclaw's evil. At the Gathering, Nightpelt has become ShadowClan's leader. He declares that ShadowClan will be hunting in WindClan's empty territory. Crookedstar decides that RiverClan will hunt there as well. Bluestar protests, so Nightpelt challenges her to bring WindClan back to the forest.

Back at the camp, Bluestar decides to take Nightpelt up on his challenge. She gives Graystripe and Fireheart a mission: Track down WindClan and bring them back to the forest. After getting travelling herbs from Yellowfang, the two head to WindClan territory. They find the camp, and manage to locate WindClan's tunnel, despite nearly running into Nightpelt (who was on the way to the Moonstone to receive his nine lives) on the way there.

After Fireheart explains that Brokenstar has been driven out, WindClan agrees to return with him. Fireheart has a harrowing experience trying to get a kit named Gorsekit across the Thunderpath, but in the end the group makes it to Barley's barn. There they find Ravenpaw, and Fireheart notes that he seems much happier than he ever was in ThunderClan.

The next day, the cats start their journey back to the WindClan camp. Barkface shocks everyone when he reads a sign from StarClan saying, "This day will bring an unnecessary death." However, they make it back to WindClan camp without trouble. Tallstar sends Deadfoot and Onewhisker with Fireheart and Graystripe to keep them safe on the way back from WindClan camp. They decide to take a shortcut through RiverClan territory, but Leopardfur doesn't like this, and she orders a patrol of cats to attack. A group of ThunderClan warriors arrive to help out, and the battle rages. Fireheart saves Sandpaw from falling off a cliff, but Graystripe's opponent Whiteclaw takes the plunge and dies. A grief-stricken Leopardfur calls off the battle after swearing revenge, while Fireheart realizes that Whiteclaw was the unnecessary death Barkface spoke of.

Back at the camp, Bluestar decides to make Fireheart and Graystripe into mentors. She gives them the kits they rescued from Brokenstar back in Into the Wild. Fireheart gets the energetic Cinderpaw, while Graystripe gets the thoughtful Brackenpaw. Fireheart spies a she-cat in the woods while training Cinderpaw, and later realizes that it was his sister, Princess. The next day, Fireheart gets Graystripe to train Cinderpaw while he goes to visit Princess. They talk for a little while, and Fireheart leaves feeling elated. Tigerclaw confronts Fireheart over this, but he manages to talk his way out of the conversation.

A few days later, Fireheart and Graystripe take their apprentices out together for training. Graystripe tries to catch a vole on thin ice, and he nearly drowns. However, a pretty RiverClan warrior saves him. Fireheart takes him back to the camp. Yellowfang says that Graystripe has a cold, and will have to stay in the camp for a while. Fortunately, Runningwind is happy to lend a paw and train Brackenpaw.

After a RiverClan patrol is spotted lingering around Sunningrocks, Tigerclaw worries that they will try to retake it. To make sure the Clan is strong enough to defend itself, Cinderpaw and Brackenpaw have to partake in an assessment. Fireheart notes that they're doing well, and Cinderpaw asks him about his kittypet roots. Fireheart worries that he isn't devoting his loyalty to his Clan. However, soon he is given other problems to worry about. Graystripe hasn't been getting better, and Fireheart realizes that this is because he is sneaking out of the camp. Leaving Cinderpaw and Brackenpaw with Runningwind, Fireheart shadows Graystripe and finds his friend having a covert meeting with the RiverClan warrior who saved him from drowning. Enraged, he confronts them, and learns that the RiverClan warrior, named Silverstream, is Crookedstar's daughter. Graystripe and Silverstream gang up on Fireheart, telling him not to interfere with true love.

Fireheart leaves the meeting feeling flustered. He talks with Yellowfang and learns that Bluestar is on the verge of losing another life. If she dies, then she'll only have one life remaining. Tigerclaw shows up and tells Fireheart that Bluestar needs to go to the Thunderpath and fall into his obvious trap. Bluestar is too sick to go, so Cinderpaw volunteers. Fireheart tells her to stay in the camp, and grabs some catnip for Yellowfang. However, Cinderpaw disobeys his orders, and Fireheart finds her broken body by the Thunderpath.

Tigerclaw helps Fireheart take Cinderpaw back to the camp. There, Yellowfang says that there's a slight chance that Cinderpaw will live, but she'll never be a warrior. Fireheart, overcome with grief at his failure as a mentor, heads back to his den to get some sleep. There, Graystripe's love of Silverstream makes him feel compelled to insult Fireheart.

Fireheart talks to Princess, explaining the situation. Princess points out that Tigerclaw was probably attempting to lure Bluestar into his trap, and Fireheart agrees. He takes some catnip back to the camp. Then, he decides to apologize to Frostfur because he failed her daughter Cinderpaw. Frostfur decides to snap Fireheart out of his depression, and he tries to find a way to move forward.

Tigerclaw sends Fireheart and Sandpaw out on a border patrol together. Fireheart expects Sandpaw to act venomous like usual, but she acts friendly instead. The two notice that the river is frozen, and back at the camp Sandpaw explains her plan for a raid on RiverClan. Graystripe tags along, desperate to protect Silverstream from his Clanmates. However, the river has already started to thaw by the time the ThunderClanners get there, and a raid is impossible. Graystripe decides to attack Fireheart instead, but Bluestar stops him.

Fireheart goes back and meets Princess, who has a kit with her. She explains that it's her firstborn, and she wants him to be wild and free. Fireheart takes the kit to be raised by ThunderClan. Bluestar names him Cloudkit, and Brindleface takes him in because she had lost two of her own kits.

Fireheart goes to see Cinderpaw, and she wistfully recalls the days when he trained her. Fireheart is worried about how the Clan will react to Cloudkit, but Cinderpaw points out that Fireheart has turned his kittypet roots into strength. Fireheart is called away, and he heads off to the Gathering. Onewhisker talks with him, mentioning the WindClan is settling in well. However, not all of the cats are happy. Nightstar angrily rants about how strange scents are being found on ShadowClan territory, and accuses the other Clans of leaving them. Back at the camp, the ThunderClan warriors worry that if they are seen as allies of WindClan, ShadowClan and RiverClan will form a Clan alliance and declare war.

A few days later, every single warrior in ThunderClan leaves the camp except Fireheart. He worries about how he's all alone, before realizing that Brokenstar's rogues are hanging around the forest. Fireheart gathers up all the apprentices and elders to defend the camp, just as Brokenstar bursts in. Fireheart sees Clawface, and his grief over Spottedleaf's death sends him into a frenzy. He attacks Clawface, but the rogue is too strong. Just when it looks like Fireheart will die, Graystripe returns to the camp and kills Clawface. Yellowfang blinds Brokenstar, and Fireheart stumbles upon her lamenting that she can't kill Brokenstar because he's actually her son. The rogues are driven off, but Bluestar decides to make Brokenstar an elder. The ThunderClan cats change his name back to Brokentail to show that he is no longer leader.

For their valour in battle, Bluestar makes Dustpaw and Sandpaw warriors, giving them the names Dustpelt and Sandstorm. However, the triumph is short-lived, as Cloudkit and the other kits have disappeared from the camp. Fireheart tracks them down, and it turns out that they wanted to help the camp with hunting. Cloudkit has caught a big piece of fresh-kill, so Bluestar lets him off with a scolding.

Spottedleaf comes to Fireheart in a dream and warns him to beware a warrior he cannot trust. Fireheart worries that he can't trust Graystripe.

Fireheart wakes up and leaves his den just in time to see Onewhisker burst in. Onewhisker explains that ShadowClan and RiverClan have teamed up to attack WindClan. The ThunderClanners rush off to help WindClan, finally deciding to form a Clan Alliance with them.

Graystripe defeats Wetfoot in battle, while Fireheart takes on Leopardfur, RiverClan's deputy. Leopardfur gets Fireheart in a death-grip, and he yells for a nearby Tigerclaw to help him. Tigerclaw smirks and watches as Leopardfur finishes Fireheart off.

And then Fireheart ninja-kicks Leopardfur halfway across a clearing. Seriously.

Fireheart then fights Silverstream and nearly kills her. However, he spares her after seeing a horrified Graystripe nearby. Fireheart and Runningwind beat Nightstar up, while Tigerclaw finishes the battle by defeating Crookedstar.

Tigerclaw confronts Fireheart over sparing Silverstream, but nothing comes out of it. However, a thankful Graystripe apologizes for his treatment of Fireheart. The two warriors renew their friendship as they shelter from a raging storm.