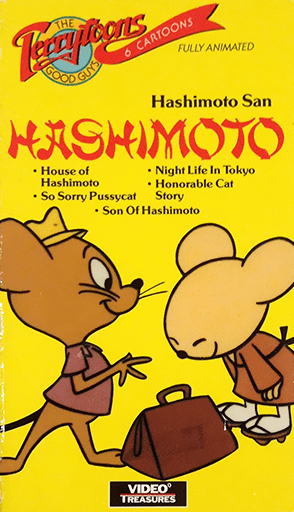 Hashimoto-san is a relatively well-regarded character from the Terrytoons studio. An anthropomorphic Japanese housemouse who practices martial arts, raises a family, and narrates tales to his friends. Hashimoto is credited by animation historians as the first serious attempt to create a largely sympathetic Asian protagonist for the medium. Rather than the vile Japanese enemies depicted in the Wartime Cartoons, and the Asian manservants and sidekicks prevalent in the American fiction of the time. He was introduced in 1959, created by director Rokuro "Bob" Kuwahara (1901-1964).

Kuwahara had been born in Tokyo. His family moved to the United States c. 1910. He entered the animation field in 1932 when hired by the Walt Disney animation studio. He worked in the storyboard department for animated shorts, such as the Silly Symphonies entry Who Killed Cock Robin? (1935) and the Mickey Mouse entry Thru the Mirror (1936). He was also involved in the story department of a feature film, Snow White and the Seven Dwarfs (1937). He left the Disney studio in 1937, starting work in Metro-Goldwyn-Mayer. World War II derailed Kuwahara's career as he spent "three hectic years" (as described by Bob himself) in an internment camp for Japanese Americans. He tried his hand as a comic strip artist from 1945 to 1950, but returned to animation when hired by Paul Terry in 1950. Nine years later, Kuwahara got to create his own character. He wanted to have the series serve to introduce American audiences to "positive images of Japan".

Hashimoto was accompanied by a supporting cast: his wife Hanako, his son Saburo, his daughter Yoriko/Yuriko, ... and an American best friend. Said best friend was an American reporter going by the name of G.I. Joe, in probable reference to a term for United States military personnel, popularized by cartoonist Dave Breger (1908-1970) during World War II. How the two met was never explained. Hashimoto was at times the actual protagonist, and at times the narrator to an old legendary story, introducing Joe-san and the audience to the many "charms and mysteries" of his native land. While the main characters spoke English, secondary characters could be heard using genuine Japanese vocabulary, though nothing too complex: terms such as "banzai" and "kawaii". The series was also noted for some "authentic Japanese touches" such as correct use of futons, shamisen, etc.

Theatrical shorts featuring Hashimoto-san and ancillary characters remained in production until 1963. By the time the series ended, Terrytoons had ceased producing most of its theatrical animated series, turning its attention to creating animated television series. Hashimoto-san turned up in his own segment at The Hector Heathcote Show (1963-1965). But when that show also ended, Hashimoto-san joined the ranks of Terrytoons' defunct characters.

In comic books, Hashimoto-san stories were featured in New Terrytoons series (1962-1979). While not particularly well-remembered, a couple of these stories can be found online, scanned by fans of the old character. Hashimoto-san briefly returned to animation, as one of many classic Terrytoons characters receiving cameos in the Mighty Mouse: The New Adventures (1987-1988). But other than that, Hashimoto-san remains defunct.