Literature / Harold and the Purple Crayon 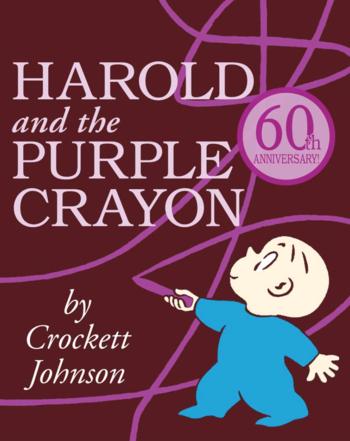 Harold and the Purple Crayon is an illustrated children’s book first published in 1955 by Crockett Johnsonnote His actual name was David Johnson Leisk. The story follows a little boy named Harold as he wanders around drawing his own reality with his purple crayon and trying to get home.

Harold is colored in with a blue jumpsuit and Caucasian skin on the book's covernote and in the Animated Adaptation, as well, and in black-and-white in the story itself. Everything else in the story is purple, since it was drawn with the crayon; this lets the reader see that Harold is somehow more real than everything else.

It has received several sequels, and also been adapted into a series of children's animated shorts, as well as an animated series on HBO (produced by Sony Pictures Television). The series is completely available on DVD, so no need to hunt hard for it.

A live-action film is in the works

, with Sony returning from the series (albeit moving from Adelaide Productions to Sony Pictures Animation) and co-producing with Will Smith's Overbrook Entertainment unit. No, really. However, as The Other Wiki notes

, news on the film has been sporadic since its initial announcement in 2010.

The books are aimed at children ages 3 to 8, but each one is a good quick read for adults.

Titles in the series:

Harold and the Purple Crayon provides examples of: