Literature / Haroun and the Sea of Stories 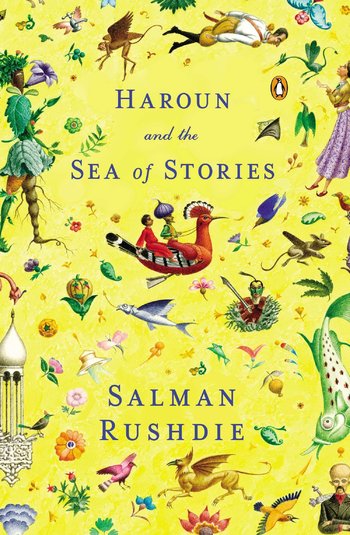 Even in all the Arabian Nights you will never have a night like this.
Advertisement:

Haroun and the Sea of Stories is a children's fantasy novel by Salman Rushdie. Haroun Khalifa lives with his parents, Rashid and Soraya, in a city so sad it has forgotten its name. Haroun, however, is happy — until one day his mother runs away with their neighbour. This event devastates Haroun, who develops a kind of ADHD as a result. Even worse is the effect on his father: Rashid, formerly a storyteller of seemingly boundless imagination, suddenly finds himself unable to spin his marvelous tales.

Haroun and Rashid travel to the Valley of K, where Rashid is supposed to speak at a major political rally. The night before the performance, Haroun catches a magical creature in his father's bathroom who has come to disconnect Rashid's supply of Story Water. Haroun, insisting that his father still needs his stories, blackmails the creature into taking him back to the magical world of Kahani, where he hopes to plead for Rashid to be reconnected. However, when he arrives, he finds that the Ocean of the Streams of Story, where all stories come from, has become polluted. Haroun must now work not only to restore his father's Gift of the Gab, but to save the Sea of Stories from being destroyed forever.

Typical of Rushdie's books, Haroun and the Sea of Stories is chock-full of satire and social commentary. However, unlike his adult novels, it takes a decidedly optimistic and idealistic tone. This is probably because it was written for children.

Examples of tropes present in the novel: