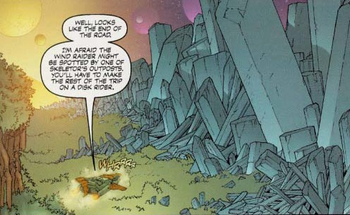 "So the wall was completed on the twenty-fifth of Elul, in fifty-two days. When our enemies heard of it, all the surrounding nations were afraid and lost their confidence, because they realized this work had been accomplished with the help of God."
— Nehemiah 6:15-16, The Bible
Advertisement:

Suppose the Big Bad has a very definite territory he calls his own, from where his hordes of darkness spawn. It's good because you always know where the baddies come from, but what do you do if you don't have the necessary manpower to end them once and for all?

Simply: just put a wall between you and them. The bigger, the better.

The Great Wall is what happens when you try to get your enemies not only out of your city but of your county, state or country, resorting to the simple mechanism of building a wall that will (one hopes) keep them out. There's usually only one of these : in most cases, no one bothers to make several walls to fall back in case the first one is breached, or, for that matter, any contingency plan or line of defense more complicated than this.

, which may have been the inspiration for many fictional Great Walls, although the Berlin Wall

have also been influential.

May be an Absurdly Ineffective Barricade if it doesn't work. Compare Insurmountable Waist-Height Fence. Invisible Wall works like that.

Do not confuse with the 2017 epic movie.