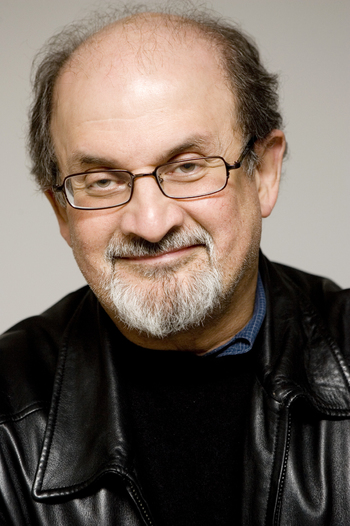 Sir Salman Rushdie is an Indian-British-American novelist of Muslim descent who has since settled in New York City. No scratch that, let's start from the beginning, or should it be before the beginning... or before that.

Rushdie was born in Bombay since renamed Mumbai, a name he doesn't care for. He was born in a liberal Muslim family, but in his own words, his father wasn't very religious and Rushdie very early started identifying himself as an atheist. He studied in England at Rugby College (which he chose because it was Lewis Carroll's school) and later majored in history at Cambridge University. He published his thesis on the origins and development of Islam, and found the material interesting, hoping one day to write a book on it.

After a stint in advertising, he started writing fiction. The first book was a Science Fiction novel called Grimus. His second book was the Breakthrough Hit Midnight’s Children. After that, he published a little-known novel called Shame and The Jaguar Smile, a non-fiction memoir of his time in Nicaragua. In 1988, he published The Satanic Verses, which resulted in massive protests in several countries and the book being banned in India (despite being a secular democracy with a Hindu majority). Things got worse in 1989, when Iranian supreme leader Ayatollah Khomeini issued a fatwa calling for Rushdie's murder, at which point Iran-backed hitmen and assassins started attacking people close to the book, culminating in the 1991 killing of the Japanese translator and stabbing of the Norwegian publisher. Rushdie had to go underground and live under an assumed name for nearly fifteen years of his life. The fatwa is still in effect to this day, with Iran's official explanation being that only the person who issued a fatwa can rescind it— and Khomeini had died just three months after his declaration.

Despite this, Rushdie continued to be a public figure, often publishing non-fiction and several more books later on. He also became a TV personality, giving interviews on chat-shows on religion, culture and freedom of speech. As a writer, Rushdie's books are highly inspired by Thomas Pynchon, James Joyce, Luis Buñuel and fall in the vein of Deconstruction and Postmodernism. They are filled with Loads and Loads of Characters, Kudzu Plot, Mind Screw and Magical Realism. They are strongly satirical, are filled with Pastiche, and feature loads of puns and Interplay of Sex and Violence.