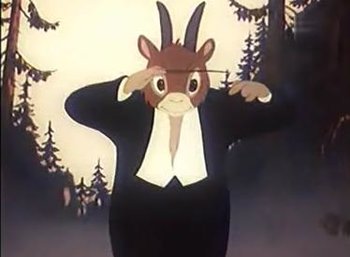 The musician himself
Advertisement:

The Goat Musician (Russian: Козёл-музыкант) is a 1954 Soviet animated short directed by Boris Dyozhkin with screenplay by Sergey Mikhalkov. It was produced by Soyuzmultfilm.

The short is a satire of composers who merely compile existing tunes in favor of actual creativity. As a musician, the goat, on the advice of his donkey friend, composes a symphonic work based off of Zhil-byl u babushki serenkii kozlik (which translates to "Once grandmother had a gray goat"). The goat's concert is preceded by the gray wolf, considered to be a respected musicologist. While he appreciated the composition, the audience took to leaving their seats dismissing the music as a hack job.