Animation / Hedgehog in the Fog 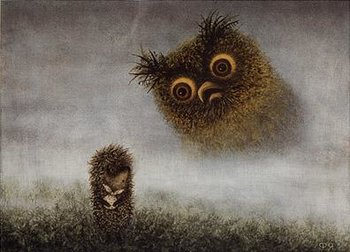 Every evening, Hedgehog travels a path in the dark forest to have tea and count the stars with his friend Bear. One evening, Hedgehog catches a glimpse of a beautiful white horse disappearing into the heavy fog. His curiosity piqued, Hedgehog dares to step off the path and pursue the white horse. But many strange and even dangerous creatures hide in the fog. As Hedgehog becomes ever more lost, he worries that he will never see his friend Bear again.

It's hard to impress upon Western viewers how large an impact this short, simple animated film has had upon Russian culture: artwork, postage stamps, stuffed toys, statues, storybooks, and many other celebratory works have been created around it. The film was even listed as one of Russia's greatest accomplishments (alongside Leo Tolstoy and Sputnik) at the 2014 Olympics. Other animators, including Hayao Miyazaki of Studio Ghibli, cite it as an inspiration.

Can be watched with English subtitles here