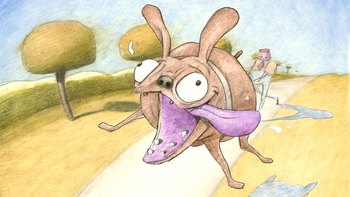 Guard Dog is a 2004 animated short film (five minutes) by Bill Plympton and the first of his Dog series.

It seeks to answer the question, why do dogs bark at innocuous things? The story takes place from the POV of a dog going on a walk with his master. The dog is a cheerful fellow who hops along with his tongue hanging out. However, any time the dog sees anything at all—a little girl, a squirrel, a groundhog, a cricket—the dog imagines that thing murdering its master in an over-the-top gory way.