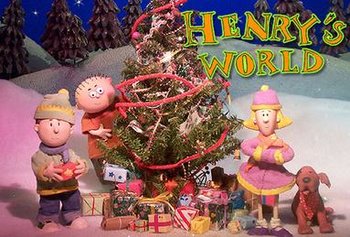 Henry's World is a Canadian animated series that premiered in 2002 and was made by Cuppa Coffee Animation (the same folks behind JoJo's Circus), TV Loonland AG (for Season 1 only), AAC Kids, and Alliance Atlantis. It is a Stop Motion cartoon about a boy named Henry Wiggins who can make his wishes come true when he eats his mother's mashed carrots. The show aired on Family Channel for 2 seasons and 26 episodes.

Tropes found in Henry's World include: