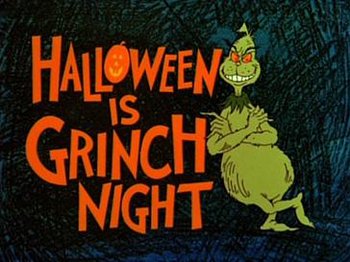 "It's a wonderful night for Grinch Night!
Their troubles will now commence!
Oh, I wouldn't stay home on a night like this
For sixty dollars and sixty cents!" note Due to a 363.9% inflation increase since 1977, this is equivalent to $281.15 today.
Advertisement:

Halloween Is Grinch Night is an animated television Halloween Special and a followup to How the Grinch Stole Christmas!. (It isn't clear whether it's meant to be a prequel or sequel, although it presumably takes place prior to the Grinch's Heel–Face Turn in Christmas.) A co-production of DePatie-Freleng Enterprises and Dr. Seuss, it first aired on ABC on October 29, 1977 and won the Emmy Award for Outstanding Children's Program the following year. Hans Conried serves as both the story's Narrator and the voice of The Grinch, in a manner similar to Boris Karloff in the earlier special. Unlike How the Grinch Stole Christmas, it is an original work and not based on a book.

The story takes place in and around Whoville, a town that the Grinch periodically terrorizes on a night known as "Grinch Night," which commences when a "Sour-Sweet Wind" blows and sets off a variety of animal calls that annoys the Grinch into terrorizing the Whos. As the story opens, the Sour-Sweet Wind is just beginning to blow when Euchariah, a young bespectacled Who (a resident of Whoville) with astigmatism, goes outdoors to use the outhouse (referred to as "the euphemism" in the story), and is swept away by the wind.

On the road he encounters the Grinch, along with the Grinch's dog Max, who are in the process of bringing a large wagon — called the "Paraphernalia Wagon" — down to Whoville. Euchariah decides to keep the Grinch from reaching Whoville by stalling him. On the first two occasions the Grinch contemptuously dismisses him by saying that Euchariah "isn't worth a first-class Grinching," but after Euchariah stalls him a third time, the Grinch decides that he's had enough of the young Who and invites him to take a closer look at the Paraphernalia Wagon. When Euchariah does so, the Grinch opens up the wagon and a cloud of green smoke with Grinch-like eyes emerges and ensnares him.

Inside the wagon Euchariah is confronted by surreal imagery, numerous monsters ("members of the Un-Human Race," according to the background lyrics) and the Grinch's mocking voice. Though he is frightened, Euchariah's courage keeps him on his toes long enough for the Sour-Sweet Wind to die down, thus forcing the Grinch to pack up and retire to his cave; the dog Max, who had been abused and overworked by the Grinch, goes home with Euchariah. Back in Whoville, the residents celebrate Euchariah's courage in preventing the Grinch releasing the Paraphernalia Wagon's full horrors on the town, and up in the mountains the Grinch, who is hauling the wagon home himself, ominously notes that one day soon the Sour-Sweet Wind will blow once more, and it will be Grinch Night all over again.

The short can be viewed in its entirety

Despite his Grinch Night being stopped by Euchariah, the Grinch takes it in stride, knowing that one day, the Sour-Sweet Wind will be back, meaning so will HE.

Example of:
We Will Meet Again

Despite his Grinch Night being stopped by Euchariah, the Grinch takes it in stride, knowing that one day, the Sour-Sweet Wind will be back, meaning so will HE.