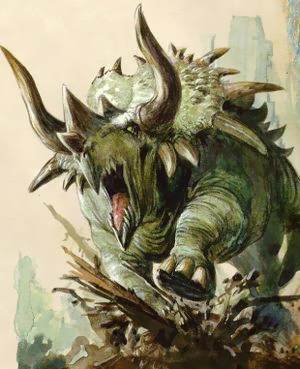 "Never have we seen such a creature; it is mighty, even in death."
The Ceratopsians

are a specific suborder of dinosaurs from the Marginocephalia

clade that first emerged during the Late Jurassic and spread across North America and Eurasia during the Cretaceous, becoming the most abundant group of armoured herbivores nearing the end of the Age of Dinosaurs.
Advertisement:

, ceratopsians are herbivores with a very striking appearance. In their case, frills behind their skulls and a select series of horns on their brows and nose. Naturally, the closest living animals we can liken to the Ceratopsids are the bull and the rhinoceros.

Because of the similarities we see between them and modern bulls and rhinos, ceratopsians are often depicted as among the more aggressive and territorial of the numerous herbivorous dinosaurs that are shown in fictional media. More often than not, they will be seen in herds, yet it's also common to see individuals duke it out against one another either for mates or for territorial lands. Additionally, ceratopsians will also make an offensive stand towards neighbouring predators.

Because our perception of ceratopsians is very limited and heavily inspired by bulls and rhinos, this can be seen as an example of Artistic License – Paleontology, though there is also some evidence that this is Truth in Television, such as fossils of broken horns, likely a sign of a ceratopsian having lost it in a battle against rival or a predator, and some fossils show damage to the heads and frills that could potentially have come from the horns of another member of their species.

The Trope Codifier is Triceratops, which is the best-known member of the ceratopsians and one of the most notable Stock Dinosaurs. It became popular through a series of combinations like its appearance in The Lost World and for being depicted as a rival to the Tyrannosaurus rex, since they lived in the same time period and location. The second most common Stock Dinosaur of this kind is Styracosaurus, for having some film roles and a very distinctive look, though Pachyrhinosaurus and Protoceratops have become a little more notable over time, partly thanks to the bizarre look of the former and the latter for being the find that confirmed that dinosaurs laid eggs, and its famous fossilization in a duel against a Velociraptor.

Compare Rhino Rampage, Cruel Elephant and Brutish Bulls, for modern-day animals whose popular portrayals closely resemble (and often influence) those of ceratopsian dinosaurs. Also compare Tough Armored Dinosaur and Headbutting Pachy for other cases of herbivorous dinosaurs being often portrayed as aggressive and dangerous. Contrast Gentle Giant Sauropod and Social Ornithopod, which are examples of a specific group of dinosaurs being socially docile and approachable. One common form of Xenophobic Herbivore.