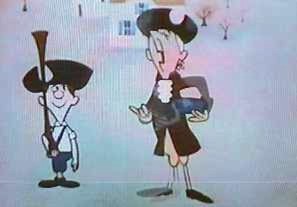 The Hector Heathcote Show was a Terrytoons cartoon production airing on NBC in 1963. Hector was a figure in Revolutionary War days who bumbled his way into helping notable figures make American history. The first shorts were made for theatrical release, then in 1963 shorts made specifically for the show were made. Also on the show were Hashimoto-san, about a family of Japanese mice who reflect traditions and folklore of their culture, and Silly Sidney, Gene Deitch's neurotic elephant and his jungle pals. The short subject Sidney's Family Tree was nominated for an Academy Award.