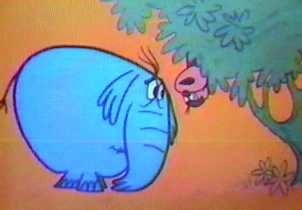 Sidney the Elephant, also known as Silly Sidney, is a relatively successful character from the Terrytoons studio. He was one of several new characters introduced in the mid to late 1950s. In 1955, studio founder and owner Paul Terry had sold it to CBS and promptly retired. The new owners appointed a new creative director for the studio. So they hired Gene Deitch (1924-), one of the guys behind the UPA animation studio. Deitch was not particularly fond of Terrytoons' production up to this point. Animation historians quote him saying: "For thirty years they had been making the crassest of unadulterated crap". He proceeded to drop most of the old characters, and had his crew create new ones.

Sidney was one of the new stars. He first appeared in the short Sick, Sick Sidney (1958), as a neurotic, thoroughly insecure, and rather whiny protagonist. His first few lines have Sidney introduce himself as "nervous as can be", unable to stand the sounds of the jungle, and "terribly insecure". He then jumps up a tree, scared by the noise caused by a bird. Complaining that the jungle noises are driving him crazy. He gets terrified when a safari arrives, an expedition intending to capture the animals and transport them to a zoo. Sidney is notably the only animal particularly worried. A lion ensures him that life in the zoo would be an improvement. But Sidney tries to pass for one of the animals no expedition is interested in, first as a gazelle and then as a snake. When a giraffe informs him that the safari hunters "don't want no elephants", Sidney changes his tune. He now wants to be captured. Eventually resolving to caging himself. But the expedition leaves him behind, taking with them just about any other jungle mammal. For a minute Sidney is at least happy that "now it will be nice and quiet in the jungle". Before deciding than now the jungle is "too quiet". He ends the short complaining about being lonesome.

His second short was more of a hit. In Sidney's Family Tree (1958), 44-year-old Sidney decides that he needs a mother to take care of him. He then politely asks female animals to adopt him. The first couple of animals refuse. But a female monkey, married but childless, takes him up on that offer. Mother and son could not be happier. But Sidney's new adoptive father can't stand the clumsy oaf. He spends most of the short trying to get rid of his dim-witted son. Who doesn't take the hint. When Sidney gets himself a new girlfriend, a young female elephant, the father is elated. Finally, his unwanted son moves out of the house. Mother is in tears. But then both elephants appear. Sidney and his new bride are ready to move in with his folks. Less whiny and more bumbling, Sidney was arguably funnier. This short was nominated for an Academy Award for Animated Short Film, though it lost to "Knighty Knight Bugs" (1958), a Looney Tunes entry featuring Bugs Bunny and Yosemite Sam.

Cartoon shorts featuring Sidney remained in production to 1963. The lion and giraffe were reworked into regular supporting characters, Stanley the Lion and Carol/Cleo the Giraffe. By the time the series ended, Terrytoons had ceased producing most of its theatrical animated series. Turning its attention to creating animated television series. Sidney turned up in his own segment at The Hector Heathcote Show (1963-1965). But when that show also ended, Sidney joined the ranks of Terrytoons' defunct characters. Sidney was an also-run in the comic book medium. He had his own stories in the back-pages of the Tom Terrific series (1957-1958) and in the New Terrytoons series (1962-1979). But Terrytoons characters were never big hits in this field.

Sidney was well-remembered enough in the 1990s to get a parody in Tiny Toon Adventures. In the episode Who Bopped Bugs Bunny, an Captain Ersatz called "Sappy Stanley" appears as the villain, attempting to get revenge on Bugs Bunny, because his greatest hit was overshadowed by "Knighty Knight Bugs".

A Sidney story was included in Nickelodeon's ill-fated Curbside pilot starring the Terrytoons characters. Several years later, Jerry Beck pitched another Sidney cartoon to the network's Random! Cartoons program; various issues forced a retool of the short into Hornswiggle, which starred an Expy of Sidney who is a rhinoceros rather than an elephant.