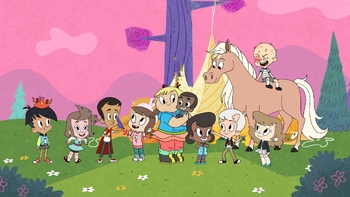 "Life is nice."note From left to right: Melvin, Lucretia, Fredo, Audrey, Lotta, Tiny, Dot, Bobby the Elder, FruFru, and Pinkeye. Not pictured: The Harvey Street Bow and Gerald.
Run, run, run this street
It's Saturday o'clock
Come on, get on your feet
The world's our dance floor
Our moves are sweet
We're Harvey Kids
Gonna run, run, run this street.
— The Do It Yourself Expository Theme Tune
Advertisement:

Harvey Street Kids is a television series produced by DreamWorks Animation for Netflix, and premiering on June 29, 2018. It is inspired by characters published by Harvey Comics.note But not based on the characters themselves.

This cartoon follows the exploits of The Harvey Girls—Audrey, Lotta, and Dot (Stephanie Lemelin, Lauren Lapkus, Kelly McCreary respectively)—the inseparable bestest of best friends the in the whole world. From having multiple flavors of ice cream, to playing a fun game of ball, to having a box of cereal, they will do whatever they can to make Harvey Street a better place.

Rallying up the cast are:

came out on May 10, 2019, under the name Harvey Girls Forever! A third season

was released on November 12th of the same year. Season 4, the final season

And remember kids, try not to grow up.