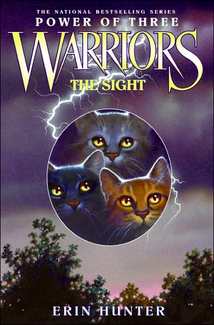 Three Arcs, Three Chosen Cats, Three Protagonists… Must Be A Coincidence
There will be three, kin of your kin, who hold the power of the stars in their paws...
Advertisement:

The series stars siblings Jayfeather, Lionblaze and Hollyleaf. They are the grandkits of Firestar, leader of ThunderClan and are believed by him to be the three, cats said to hold power beyond anything the clans have ever seen. When Jayfeather accidentally obtains this knowledge, he makes it his life's mission to fulfill the prophecy. Meanwhile, vengeful cats from the past search for opportunities to obtain revenge, outsiders arrive to wreak havoc among the cats, and the secrets of the past come to light which could gravely affect the future...

Power Of Three Provides Examples of: