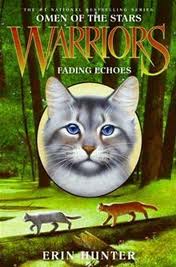 The end of the stars draws near...

Warrior Cats: Omen of the Stars is the fourth arc of the Warrior Cats series. Serving as a direct continuation of the Power of Three series, Omen Of The Stars aims to conclude the story of Warriors. With the ultimate battle of good and evil looming, three cats must unravel the secrets of the past to save the clans from the most legendary villains in Warriors history.

Six moons after their sister Hollyleaf vanished, Jayfeather and Lionblaze are still trying to determine whether Dovewing or her sister Ivypool is the true third. While on a mission to another clan, Lionblaze witnesses Dovewing display strange powers and realizes that she is the true third. While Jayfeather and Lionblaze train Dovewing in the ways of the three, Ivypool's jealousy allows the villainous members of the Dark Forest to lure her into their ranks. While training there, Ivypool learns that the Dark Forest members intend to declare war on StarClan. As the clans crumble, all cats must choose between attaining their desires or saving the clans.

Alternative Title(s): Omen Of The Stars