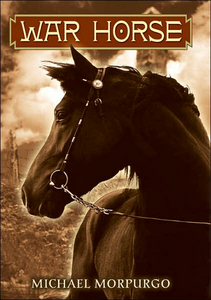 And like Barleycorn, who rose from the grave, a new year will rise up again.
Advertisement:

War Horse is a book and later play adaptation by acclaimed children's writer Michael Morpurgo. Appropriately enough, the play was originally done in Europe, then ported to America with some long-distance collaboration, meeting great deals of success both commercially and critically. Steven Spielberg's film adaptation was released on Christmas 2011.

War Horse takes place in 1914 during the outbreak of World War I in Great Britain. It follows the life of a young foal, Joey, and his initial interactions with his owner, Albert Narracott, the son of a drunk who spent nearly double the estimated value on the horse at an auction. (39 Guinea!) A bond swiftly forms between Joey and Albert as he cares for and trains Joey to farm life. However, when a badly-timed rainstorm takes out the farm's yearly crop, Albert's father is forced to sell Joey to the military in a desperate attempt to pay the rent. Joey departs for the war in France, with Albert promising to find him again when the war ends.

What happens next is Joey's journey through both sides of the war, interspersed with Albert joining the military to make good on his promise.

War Horse is noteworthy for its narrative twist on war, attempting to show the conflict from the viewpoint of horses who switch sides several times over the course of the war, and their observation of humaneness on both sides. While the featured horses in War Horse are just puppets, several surreal usages of special effects and 3 puppeteers per horse lead to affecting plot progression and Manly Tears shed by all. War Horse won the Tony award for best play in 2011, and at a whopping 2-and-a-half-hour playtime of emotional prodding, it's hardly a surprise.