Literature / The Whisperer in Darkness 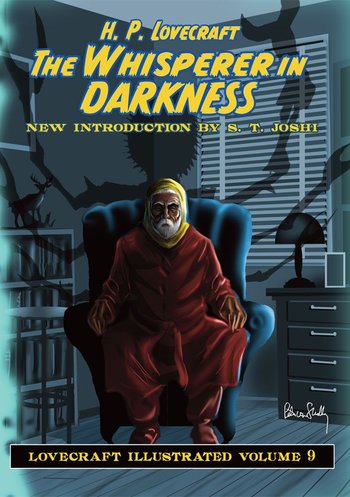 "The Whisperer in Darkness" is a novella by H. P. Lovecraft, first published in Weird Tales in August 1931.

Albert Wilmarth, a scholar of literature and folklore at Miskatonic University in Massachusetts, enters into a correspondence with Henry Akeley, who claims to have found proof that the mysterious and monstrous creatures spoken of in the folklore of his native Vermont are real, and are aliens from another world who have been secretly active on Earth for centuries. Akeley's letters, as well as relating his discoveries, recount the increasing danger he believes himself to be in as the aliens and their human allies seek to recover and destroy the evidence he's gathered. These culminate in a desperate letter announcing that he's probably doomed — followed by a much more cheerful one claiming that the aliens aren't so bad after all, and inviting Wilmarth to come and see for himself...

Although it makes numerous references to the Cthulhu Mythos, the story is not a central part of the mythos, but reflects a shift in Lovecraft's writing at this time towards Science Fiction. The story introduces an extraterrestrial race of fungoid creatures usually referred to by fans as the Mi-Go (which in the story is just one creature from Earth mythology they're said to have inspired) or the Fungi from Yuggoth.

In 2011 a film version was distributed by the H. P. Lovecraft Historical Society.

In 2020 the HPLHS returned to the story with yet another audio drama version for their long-running Dark Adventure Radio Theatre series.